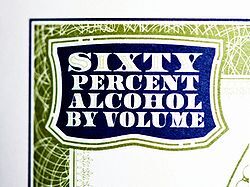 ABV is a standard measure of how much alcohol is contained in an alcoholic beverage (expressed as a percentage of total volume). The ABV standard is used worldwide.

In some countries, alcohol by volume is referred to as degrees Gay-Lussac (after the French chemist Joseph Louis Gay-Lussac).

Another way of specifying the amount of alcohol is alcoholic proof. An "alcoholic proof" is roughly twice the alcohol by volume (although this does vary in some countries). In the United States, many states legally regulate and tax alcoholic beverages according to alcohol by weight (abw) (expressed as a percentage of total mass).