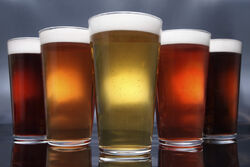 Beer is the world's most widely consumed and probably the oldest alcoholic beverage. Beer is made with four main ingredients – water, grains, hops, and yeast – and is categorized into two primary types: ales and lagers.

It is the third-most popular drink overall, after water and tea. The production of beer is called brewing, which involves the fermentation of starches that are mainly derived from cereal grains, most commonly malted barley, although wheat, maize (corn), and rice are widely used. Most beer is flavored with hops, which add bitterness and act as a natural preservative, though other flavorings, such as herbs or fruit, may occasionally be included. The fermentation process causes a natural carbonation effect, although this is often removed during processing and replaced with forced carbonation.

Some of humanity's earliest known writings refer to the production and distribution of beer: The Code of Hammurabi included laws regulating beer and beer parlors, and "The Hymn to Ninkasi", a prayer to the Mesopotamian goddess of beer, served as both a prayer and as a method of remembering the recipe for beer in a culture with few literate people.

Beer is one of the oldest beverages humans have produced, dating back to at least the fifth millennium BC and recorded in the written history of ancient Egypt and Mesopotamia and was spread throughout world. Since then it has been used as both a food product and a medicine.

As almost any cereal containing certain sugars can undergo spontaneous fermentation due to wild yeasts in the air, it is possible that beer-like beverages were independently developed throughout the world soon after a tribe or culture had domesticated cereal. Chemical tests of ancient pottery jars reveal that beer was produced as far back as about 7,000 years ago in what is today Iran. This discovery reveals one of the earliest known uses of fermentation and is the earliest evidence of brewing to date. In Mesopotamia, the oldest evidence of beer is believed to be a 6,000-year-old Sumerian tablet depicting people drinking a beverage through reed straws from a communal bowl. A 3,900-year-old Sumerian poem honoring Ninkasi, the goddess of beer, contains the oldest surviving beer recipe, describing the production of beer from barley via bread. In China, residue on pottery dating from between 5,400 to 4,900 years ago shows beer was brewed using barley and other grains.

The invention of bread and beer has been argued to be responsible for humanity's ability to develop technology and build civilizations. The earliest chemically confirmed barley beer to date was discovered at Godin Tepe in the central Zagros Mountains of Iran, where fragments of a jug, at least 5,000 years old, was found to be coated with beerstone, a by-product of the brewing process.

Beer may have also been known in Neolithic Europe as far back as 5,000 years ago, and was mainly brewed on a domestic scale.

Beer produced before the Industrial Revolution continued to be made and sold on a domestic scale, although by the seventh century AD, beer was also being produced and sold by European monasteries. During the Industrial Revolution, the production of beer moved from artisanal to industrial manufacture, and domestic manufacture ceased to be significant by the end of the nineteenth century. The development of hydrometers and thermometers changed brewing by allowing the brewer to have more control of the process and greater knowledge of the results.

However, it has been noted that the beer produced several millennia ago bears minimal resemblance to modern beer; though the use of fermentation and grains is common to both.

The process of making beer is known as brewing. A dedicated building for the making of beer is called a brewery, though beer can be made in the home and has been for much of its history. A company that makes beer is called either a brewery or a brewing company. Beer made on a domestic scale for non-commercial reasons is classified as homebrewing, regardless of where it is made, though most homebrewed beer is made in the home. Brewing beer is subject to legislation and taxation in developed countries, which from the late nineteenth century, largely restricted brewing to only a commercial operation. However, the UK government relaxed legislation in 1963, followed by Australia in 1972 and the US in 1978, allowing homebrewing to become a popular hobby.

The purpose of brewing is to convert the starch source, such as barley, into a sugary liquid called wort and then to convert the wort into the alcoholic beverage known as beer, in a fermentation process affected by yeast.